KICKING OFF THE AAHH! FEST

Grammy-Award winning Hip-Hop Artist/Actor/Activist Lonnie Rashid Lynn, known to most as “COMMON” has proudly promoted his Chicago roots throughout his 20+ year career in entertainment. More than 10 years ago, COMMON founded The COMMON GROUND Foundation, a non-profit organization that serves youth, ages 13-15, from Chicago’s south and west side communities, through COMMON’s Dreamers & Believers Mentoring Program and Youth Summer Camp.

In addition to the work of the Foundation, in 2014 COMMON is launching an Annual Music Festival in Chicago to “celebrate what’s great and positive about Chicago” and to “let the city breathe and enjoy art, life, love”!

The AAHH! Fest has an even greater purpose:
•To raise funds to support art education and youth programs
•Create summer jobs and internships
•Showcase local businesses
•Give needed resources to anti-violence initiatives throughout the City of Chicago

The Festival team, along with community leaders in Chicago will identify a specific need each year, an example would be:
•A school “Tablet Lab”
•A new Art Room
•A clean-up site
By the end of the Festival weekend, that need will be met!

NOBODY’S SMILING, released July 22nd, 2014, is the 10th Studio Album from COMMON which reflects his personal concern for the ongoing violence in his hometown Chicago, as well as urban communities around the country. Self-described as “my version of Marvin Gaye’s What’s Going On, “ COMMON is tackling the themes of violence, life, and love in the inner-cities.

This music will become the catalyst for continuing to raise awareness, but most importantly, to help find solutions and inspire change. 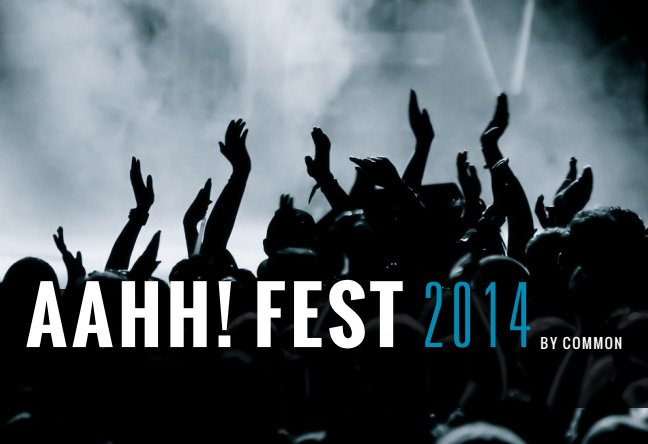